Ramen: I see they’ve got you Americanized with your Harley Davidson gear on.

MØ: Yeah I bought it yesterday. I’m so excited to be here, I’ve dreamed about it forever. It’s legendary. Always people talking about cool shows they’ve been to at Webster Hall.

Ramen: What have you seen recently that kind of blew your mind?

MØ: We went to Istanbul, I’d never been to Turkey. It was nice to see how the Muslim world mixed with the western world there. And they get along, at least, that’s what it seemed like.

Ramen: Does being from outside America gives you an interesting perspective here?

MØ: Well I’ve been to America a lot of times in my life because my family has very good friends over here but I think that America is not that different from Europe or Scandanavia, I mean a bit, but western culture is kind of the same. People are more friendly over here. I haven’t been to places like Iraq or Iran, but the place that I’ve been that I’ve felt that is really different, is Russia. You could really feel that cold war vibe, big streets with lots of people on the corner, but in a way I like that vibe.

Ramen: Is being back in New York a good experience?

MØ: Well right now everything goes so fast, with social media everything is like boom boom boom (indicating rapid succession) because there’s no money in the industry and so many people only think about money, and everyone is like …well just so much has happened in the past 3 months but I really like touring over here because the audience is very open minded and there’s always a nice vibe at the venues.

Ramen: The first time that you came to New York for work, did you have a different viewpoint than previously coming here as a tourist?

MØ: The first time I came here to play I was like “Oh my god, I’m going to play in New York, I’m going places, while life is strange is beautiful and blah blah.” Because New York is New York and I’m just from the countryside in Denmark. You know I was 20 when I came back and it was just crazy for me.

Ramen: Have any of your friends hit you up now and said “Hey will you listen to my music?”

MØ: No I think most of them are too shy and don’t want to go down that road. And a lot of my friends that do music do punk and hardcore and experimental stuff so they don’t care about my opinion now at least.

MØ: It’s flat, it’s flat. It’s chilled, a bit boring, nothing really happens. We don’t even have extraordinary nature or anything but it’s nice. People are happy in Denmark; they say Denmark is the most happy country in the world, we got a lot of beaches, but it’s just cold so you don’t really use them.

Ramen: Did a lot of your friends do music too when you guys were growing up?

MØ: When I grew up it was in the suburb to this little town and when I started wearing black clothes people were like, “OH MY GOD, she got herself a mental disease.” They actually thought I was getting sick because I was wearing black clothes, like weird clothes, but it’s ok I understand it, you know, I’ve never been to the southern USA but if you wear all black clothes there, people will be like..”oh shit.” I had friends but suddenly when you become a teenager everything changes and I just felt like being different or something. I remember I really wanted to be like “GRAAAA” (death metal scream) and I don’t know why because I grew up in a nice family and everything was always kinda good. I just felt like joining the punk movement.

EasyMac: What’s some of your favorite artists out right now?

MØ: Well I really like FKA Twigs, obviously, I think it’s like future sounding, and I just heard the newest Ice Age from Denmark, it’s like this punk/pop-core band on tour over here now but their new stuff is the best things I’ve heard for ages. I haven’t really listened to very much contemporary stuff I only put on new stuff if people tell me to check it out.

EasyMac: What advice would you like to give to me?

MØ: Ah don’t try to be something you’re not, but you guys seem kinda relaxed so I don’t need to tell you that I guess! Or just don’t try to be cool just be clumsy it’s fine, it’s good. It’s good to see the flaw because nowadays with the social media and media it’s all about trying to be project yourself in such a perfect, flawless, mystic, cool way. And you have to have a perfect boyfriend, and a perfect job and nice skin and good at..and..it’s just too much, so I’m really voting to just fall on the street and do stupid stuff and take pictures like fuck that, just stop being uptight..there’s too many people that try to do that and it gives people lifestyle diseases and I feel like puking.

EasyMac: What’s a compliment that you find hard to accept from people?

MØ: I guess when people try to tell me that I’m really pretty.

Ramen: Who do you have with you here travelling with you?

MØ: My band, and the guy who plays keys in my band, he’s like the older brother to my friend who I used to have a punk band with, so it’s like family, it’s so nice. But also the others because we’ve been touring constantly, almost two years, they’re your family because you see them more than you see your mom, it’s so important to love the ones you travel with. It would be a living hell if you were like ugh..about them.

Ramen: What’s your next stop after this one?

MØ: Philidelphia, and the Montral and Toronto and then I think Louisiana too. Then we’re done in 5 weeks.

Ramen: Did you grow up going to Distortion (the huge summer festival/party in Copenhagen, Denmark)

MØ: Well it only really started a few years ago, and now it’s become so popular that it’s almost a little stressful.

EasyMac: When did you realize you were living your dream?

MØ: It’s like something I’ve started to realize it in these past months. Of course there’s always new goals, new steps, I’m not relaxed and it can change like this (snaps) and be over forever. But sometimes if I allow myself to think those thoughts I’m like..”ah this is nice.” You can’t lie down and relax, there’s no such thing as that. That’s good. It’s good to keep your brain busy otherwise you would get boring.

Ramen: What neighborhood of NYC do you like the most?

MØ: I have a good friend here and she lives in the middle of Brooklyn, a bit dangerous neighborhood, she said they’ve been robbed many times, it’s like between downtown and Williamsburg, I guess the reason why I really like it is because we’ve hanged out there and done so much stuff, it reminds me of good times. I really like kind of everywhere in New York, there’s no place that I don’t like. When I was here on an internship for a month, back then I lived in Harlem and I really liked that too. And I also like being downtown Manhattan. You know it’s fun, touring, I’m a tourist when I’m here. Everything’s exciting.

Ramen: Do you have any new music videos out?

MØ: Well I have this new video out with Elliphant, (from Sweden), she’s such a cool girl, I’m a fan of her personality I wanna be like her, she’s so cool. We just released the video, One More, it’s just her and me getting drunk in the backseat of a taxi.

MØ: Yeah you should see it. And I’m writing some new songs of course, I don’t know when I’m going to drop a new video for that.

EasyMac: What do you think of Sweden?

MØ: Very beautiful and nice, I really respect the Swedes, they’re so ahead of everybody in Scandanavia like in music and design, all these creative people who respect their working morals. So many cool Swedish acts. I also love Lykke Li, and Robyn. And now I have to eat and get ready for tonight.

She ripped open the huge plate of fresh fruit & veggies and hummus on the table and we helped ourselves to the kitchen full of snacks. She laughed,

“One of the benefits of being a musician.”

Some photos from her concert. She barely used the stage, jumping into the crowd and dancing on the bars during most of the concert. She sang an entire song from the balcony walking on the ledge. Crazy 🙂 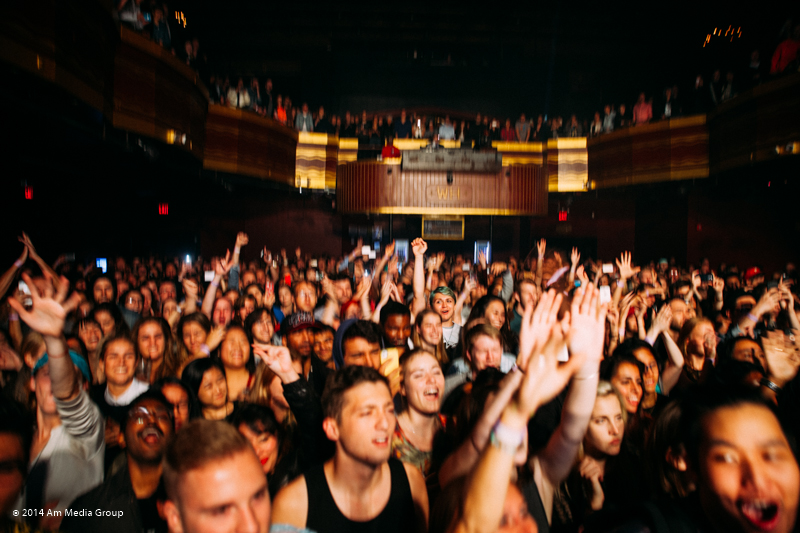 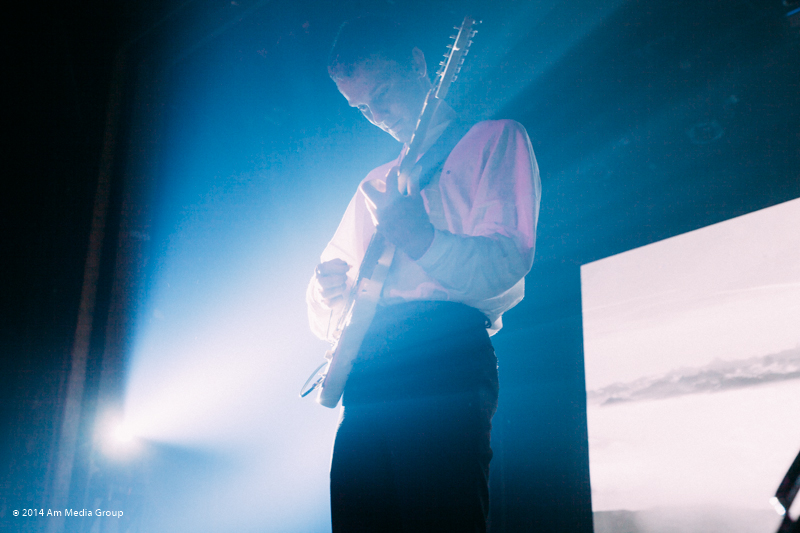 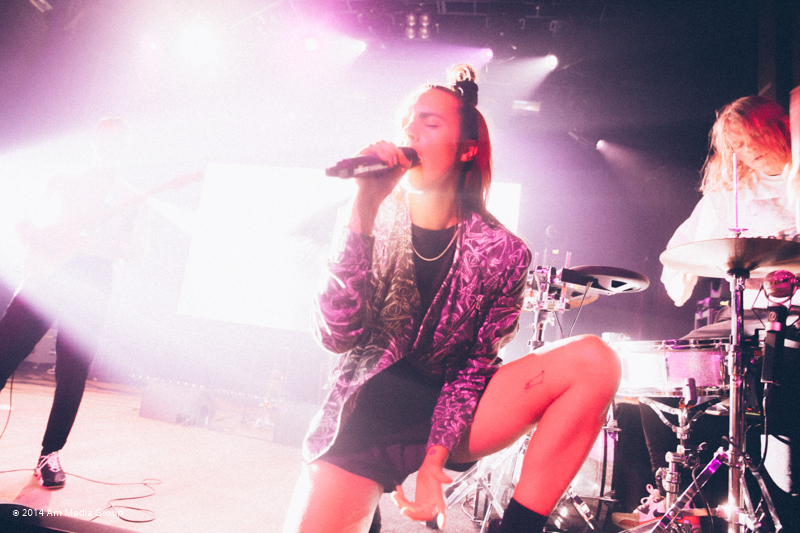 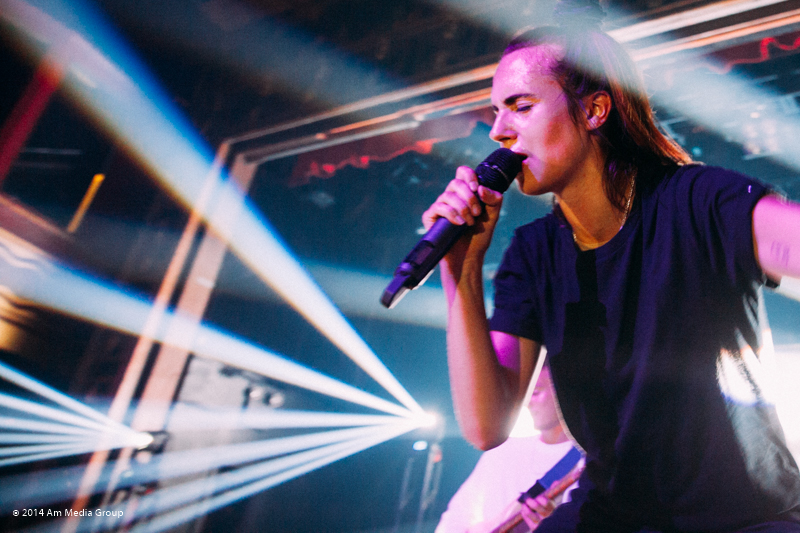 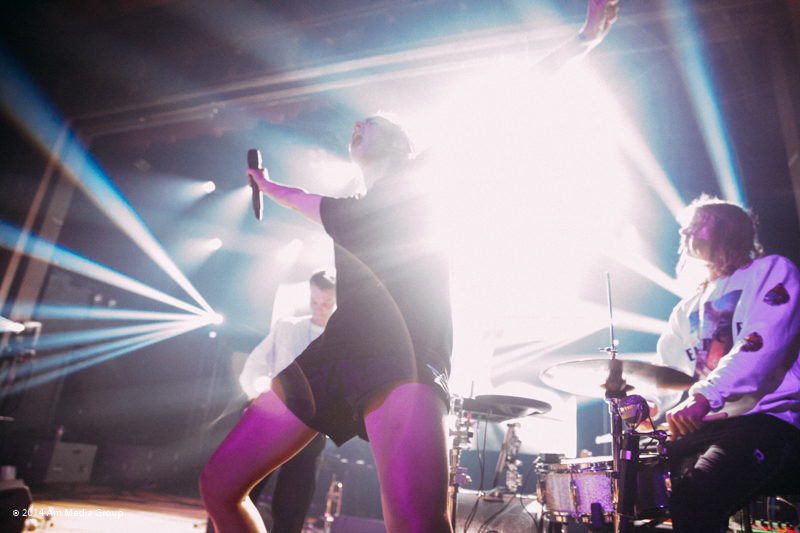 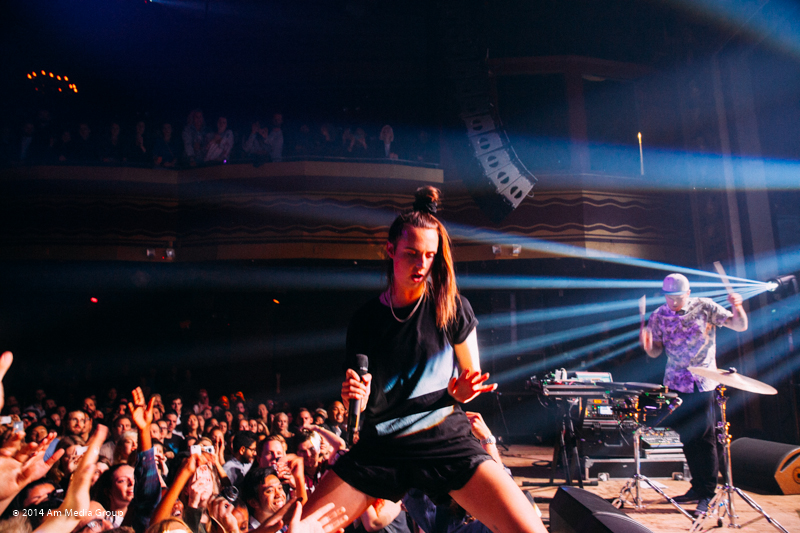 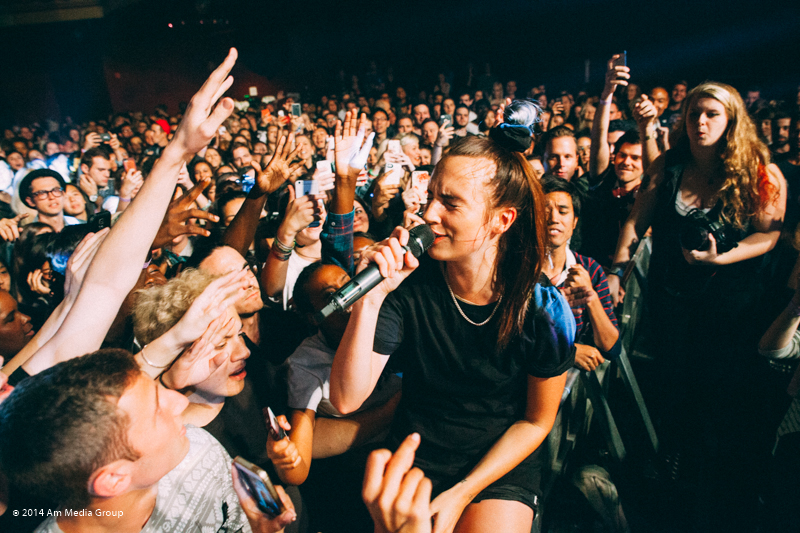 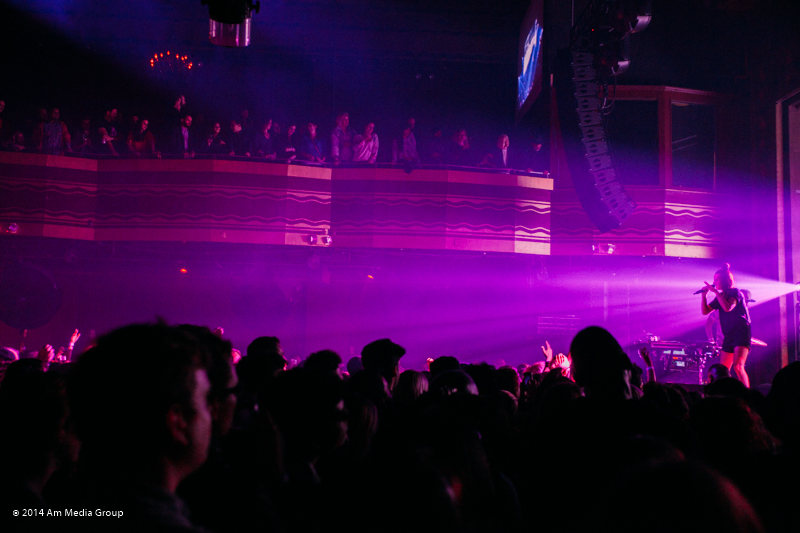 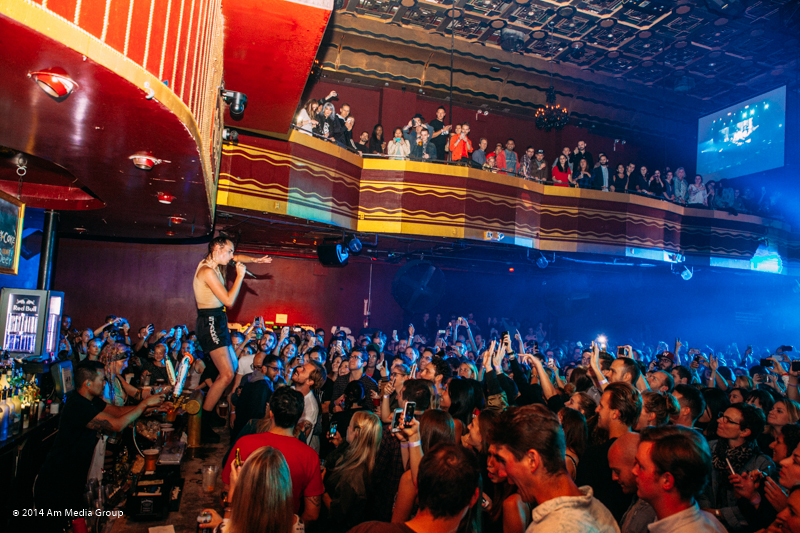 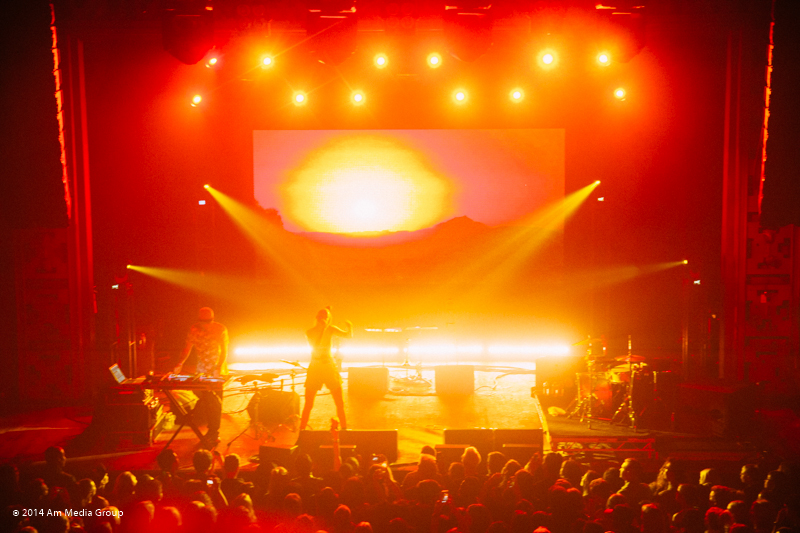 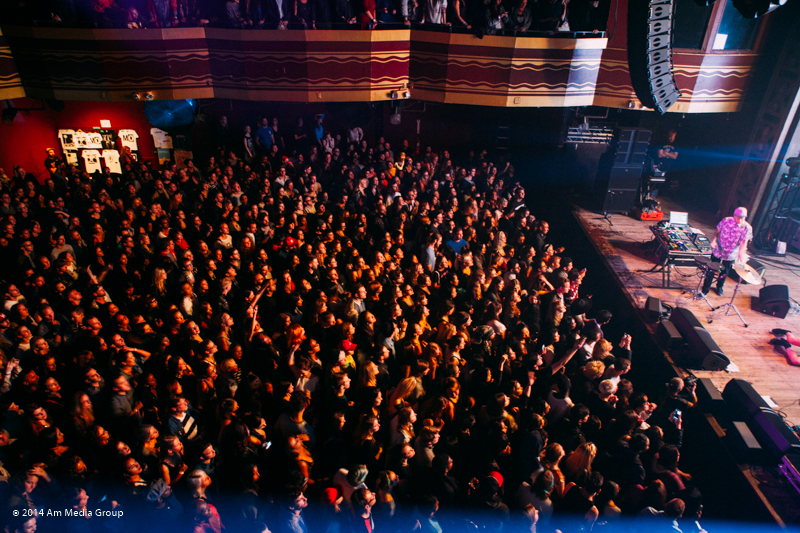 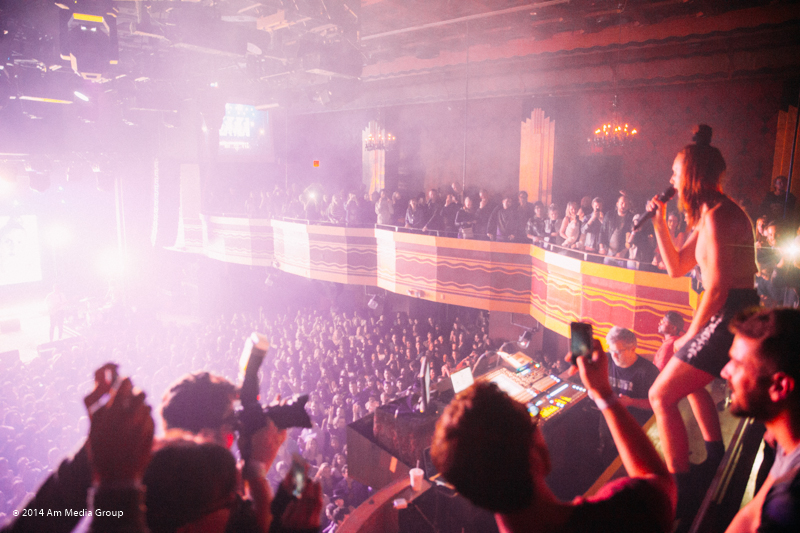 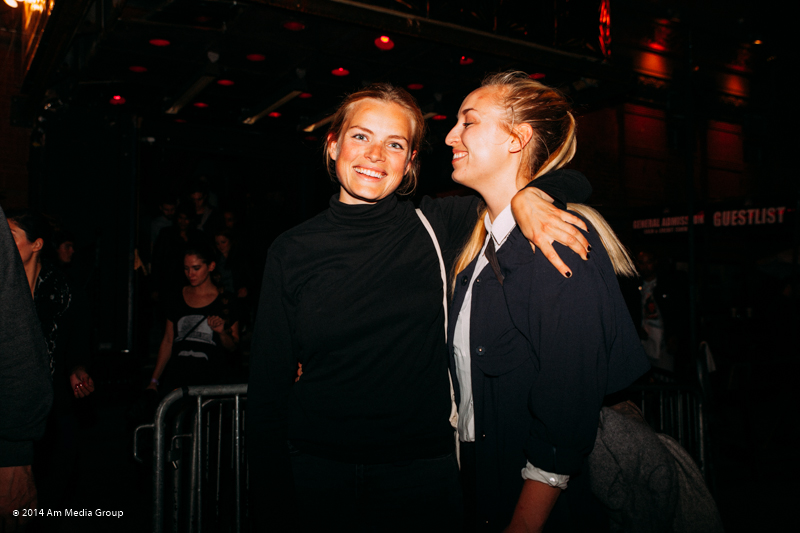 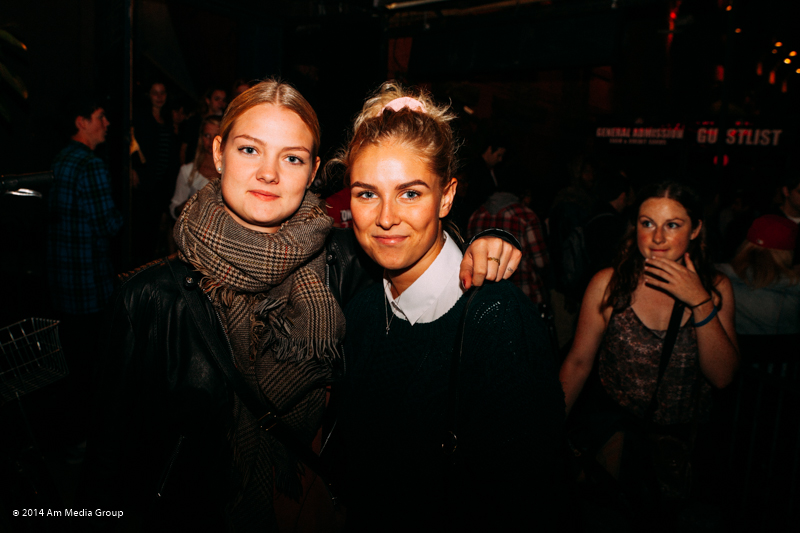 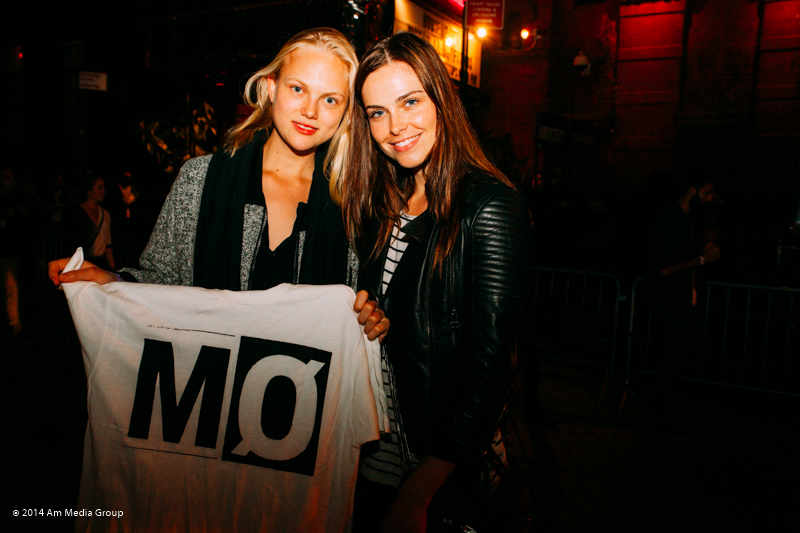